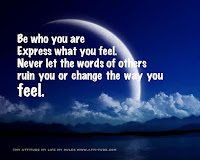 For everyone life is full of ups and downs, we don't need to be reminded of that, at times life goes swimmingly well and then it changes to something else, not necessarily bad or worse but like you've just been grounded and almost treading water as nothing seems to materialise or move forward in the way or ways you would like or have indeed anticipated. However if you just accept and feel low when the good times appear to stop then you will have succumbed to a nothingness of our own creation. Everything has a shelf life or best before date including ourselves so it stands to reason that aspects in life have the same, just because we don't want good or nice things to come to an end is immaterial and a bit stupid also. The fear of things going wrong isn't a valid fear as if fear is valid at all, but it's not even worthy of contemplation as it leaves room for instability to take hold. It's funny that at times when things are going well people become complacent as it all seems nice and bubbly, then when it stops they become remorseful and take on that "woe is me" attitude to varying degrees. Whereas we should be vigilant at all times so that the ups and downs are evened out somewhat and we can then best enjoy the good times and not have to endure the not so good times. 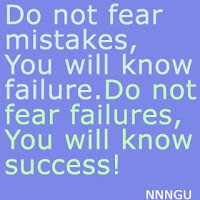 The worst thing we can do is forever compare ourselves or circumstances or situations to others, none of it is relevant, and if the opportunity to do what others do or did comes along it would never manifest itself the same way, in fact you would be surprised at the reaction you have should you ever be faced with such choices and availability. Our assumptions in some area  of life are so crass that we deem we "know" ourselves but often perceptions and the reality of affordable or doable choice takes the potential excitement out of literally doing it as we can then see beyond simple areas or mere acquisitions that were once on our "wish list" and move to more tangible areas that can provide more substance both physically and mentally. Many people let themselves down badly and protract a dullness in life through the sheer desire to want or do something which once gotten is placed in the "OK" box in the mind and then they wander on to something else and whilst it may be nice to have it doesn't further their inner self to satisfaction or happiness. 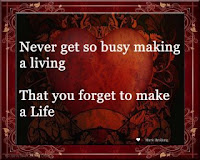 Every area of our life is a phase, it's either work, relationship, financial, age related and it's never ever the same. Maturity quells for most people desires that were strong when young but mean little later on. As life progresses one also notes that the 'self' is more important than following others who if died wouldn't make the slightest difference to life except those around them but not you. It's not that degrees of selfishness take a hold it's the importance and trivia that separates out what is indeed pertinent to your life after all you are the only one to steer your ship no one else. It also doesn't mean you can't follow your favourite sports person or whatever, it's just a perspective that puts you more firmly in charge and allows you to balance your emotions accordingly which has an elevatory effect. If we can't do things for ourselves no one can, even if they assist us greatly it's still us that has to walk the walk and talk the talk.

If you feel that life has becalmed you worry not as that is the worst thing you can do, worry has the effect of neutralising creativity and acting as a magnet for a whole array of negativity which is the last thing you need. Being positive even in the face of adversity is the answer to shaking off both the blues and what is ahead of you that's of no consequence. Positive attitudes attract positive people so if you are on a sympathy trip you've lost, and don't take to heart what others are perceivably doing and you are not, you don't know what they have gone through or are indeed going through either, which could be ten times worse than yourself. If you want to succeed at anything you have to exude it otherwise people will not trust you respect you nor think you are worthy either. So much is in your own hands that thinking everything is at the mercy of others will eliminate any opportunity that's there, people need people, the good and successful need people to keep good and successful it just doesn't happen in isolation. You too can be good and successful there's no reason why not, unless you think there is then it's all back down to you.

For more : www.thelifedoctor.info
FREE "E" Book : www.the-alchemy-of-life.com
RADIO : www.liferadiointernational.com
©John Rushton / The Life Doctor 2012
(These blogs are read in over 120 countries, if you like what you read please re-send them to others
Posted by John Rushton at Thursday, May 17, 2012